New IOM report on US versus…everyone else

The Institute of Medicine has released a major new report today on the reasons why the United States seems to have poorer health, despite its greater wealth, as compared to other industrialized countries.

The report reviews evidence on life expectancy and health in the United States, comparing U.S. data with statistics from 16 “peer” countries—other high-income democracies in western Europe, as well as Canada, Australia, and Japan. The report looks somewhat historically, but focuses mostly on data from the late 1990s through 2008. 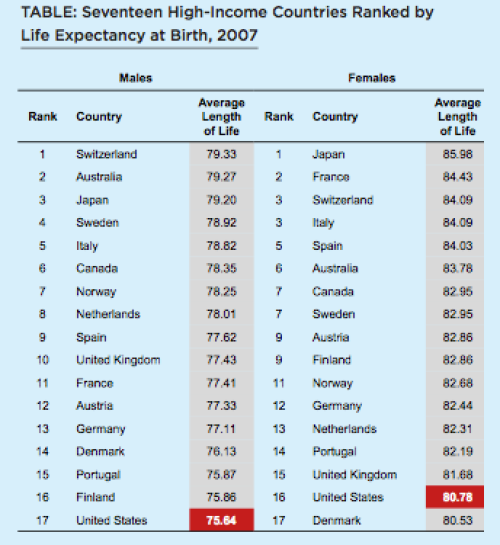 Unsurprisingly, the data reveal that Americans are less healthy that their peers, despite paying more for healthcare. That’s not new. What’s particularly striking, however, is that Americans have been dying at younger ages than people in almost all other high-income countries. A lot of Americans actually aren’t making it to age 50. This disadvantage has been getting worse for three decades, especially among women.

There were nine areas that Americans fared worse in rather consistently:

Perhaps most significantly, this report was one of the first times that an official US government body acknowledged that all of this effect is probably not due to bad behaviors or the healthcare system. While some of this problem is undoubtedly from poor healthcare access and poor quality of healthcare for the impoverished, it’s estimated that less than 20% of avoidable mortality in the US is due to poor healthcare. Also, our health behaviors aren’t universally worse than others; Americans actually smoke and drink less than Europeans, though we do eat more calories, abuse drugs more, don’t wear seat belts as much, and seem to drink-and-drive as well as shoot each other a lot more. But the report also squarely indicated that evidence is accumulating for two other major factors: (1) socioeconomic status: social mobility is worst in the US and while overall average income is higher, inequality is higher too, producing an overall markedly large pool of the impoverished, as well as lower rates of education among the young and really poor safety net programs to buffer against poverty, all of which are strongly related to health outcomes; and (2) the built environment in the US tends to be designed around automobiles, theoretically discouraging physical activity and contributing to obesity. We are beating everyone else on the obesity ranking…(we’re number 1! USA, USA!).

This message might have been lost in translation; while The New York Times and other media coverage seemed to focus a lot on health behaviors, the IOM report itself actually focused quite a lot on socioeconomic factors.

This entry was posted in Health equity, Social determinants of health, Stats. Bookmark the permalink.

One response to “New IOM report on US versus…everyone else”