Politicians have talked endlessly about deficits and finance during our ongoing economic crisis. But we’ve talked far less about achieving another major goal that is just as important, if not more so, than promoting stable financial markets: protecting our health and well-being during hard times and into the future. What policies are most effective in preserving our health during economic recessions—and can we afford them?

That question, it turns out, can be answered through data and careful research on recessions both past and present. My colleague David Stuckler and I are today releasing our peer-reviewed book, entitled The Body Economic, in which we boil down over a century of data from across the globe to answer the question of what policies actually improve both our economies and our public health during and after economic recessions.

Is bad health inevitable during an economic downturn?

But there’s a problem with this analysis: average death rates are… well… averages. Using more detailed, disaggregated data, we’ve found that hidden beneath this average trend are a lot of variations—with some people doing very well, even becoming healthier during recessions, and others falling into serious illness. For example, much of the decline in death rates during both The Great Depression and our current recession is due to reduced traffic accidents. As people can’t afford to pay for gas, they drive less.

But hidden beneath this decline, at least in the United States, Britain, and several other countries, is a dramatic rise in suicide rates and alcoholism (spikes in deaths that get “washed out” or masked by the large drop in traffic accident deaths). Overall alcohol sales decrease during recessions, but that average is again deceptive—many people buy one less “two buck Chuck” at Trader Joe’s, but a significant population of over 700,000 men in the United States (mostly single young men who lost work) started binging during the economic recession.

Here’s the good news: these suicides and alcoholism cases aren’t inevitable. Correlation is not causation, and that’s precisely our point: in Sweden, for example, massive spikes in unemployment were not accompanied by increases in suicides: 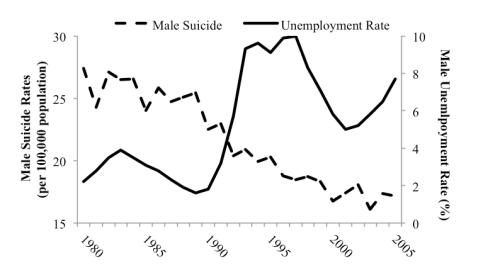 We can compare the Swedish experience to that of Spain and many other countries, where suicides did spike in parallel with unemployment: 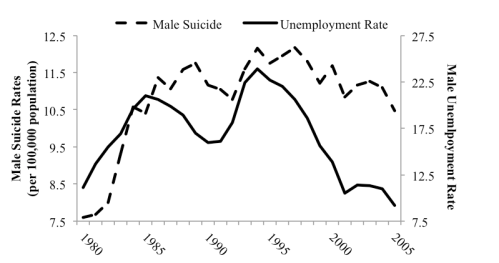 These increases in suicide rates also affected the United States, where about 5,000 “excess” suicides have been observed during the recession (that is, suicides above and beyond pre-existing trends), which are significantly related to local unemployment rates: 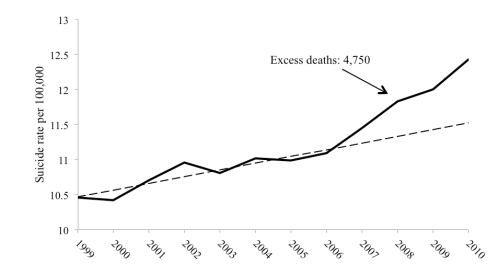 What did Sweden do differently from Spain, the United States, and many other countries? It turns out that Sweden started a very specific program that helped people get back to work quickly, simultaneously boosting the economy and reducing rates of depression and suicide. That program wasn’t a simply unemployment check or “hand out”, but it involved a case management program that worked with both the newly-unemployed and their firms to generate new jobs. It was ‘part carrot’ and ‘part stick’: people received help, but they had to participate in the program to get unemployment benefits. To test out whether the program really worked, randomized controlled trials were performed in a variety of different settings and populations, which confirmed the program’s impact on the economy and on health outcomes including depression rates (so it’s not just “being Swedish” that’s special).

Conversely, there’s some very bad health news from our current recession, and from previous recessions: austerity programs (which involve sweeping budget cuts in an attempt to reduce short-term deficits) appear to be counter-productive for both economic recovery and our health. This is evident in the East Asian crisis of the 1990’s, for example, where some countries decided to chop budgets through a sequester-like program that ended up ironically prolonging their economic recessions and increasing malnutrition and other prevalent public health problems; other countries underwent deficit spending and actually stimulated their way out of deficits and recessions, into longer-term economic booms. The stimulus countries avoided major catastrophes like a rise in infectious disease rates that their austerity-promoting neighbors experienced as vaccination rates and public health programs faltered from budget cuts.

The same patterns of austerity versus stimulus were observed in the mid-1990’s in Eastern Europe (and, interestingly, the defenders of austerity and mass privatization in Russia omitted data from their analysis and made serious coding errors, just as in the recent Reinhart and Rogoff affair). These cases are “natural experiments” in which similar populations experience a common shock (in this case, an economic recession), and experience the effects of different policy decisions, allowing us to study which policies actually benefited both the economy and public health (through instrumental variables and related techniques).

During our current recession, Greece has emerged as a particularly bad public health disaster related to austerity. In Greece, major public health statistics were already looking bad due to the effect of the recession on poverty rates and associated outcomes like depression and alcoholism, but austerity itself led to serious spikes in death rates that were avoidable. Austerity measures chopped a mosquito-spraying budget, for example, that led to the first malaria outbreak in decades—an outbreak more costly to control than to prevent. Similarly, an HIV outbreak started after young people facing a 50% unemployment rate turned to injection drug use just as the HIV prevention budget was slashed. Economic and epidemiological projections reveal that the rates of these diseases would have been much lower had a better stimulus been enacted in Greece, helping the country grow out of the slump and preserve key disease-prevention budgets.

Can we afford safety nets in a recession?

In discussing Greece and other countries facing austerity, a major—almost religious—belief seems to be that while public health programs might be useful, we simply can’t afford them. It’s “common sense” to believe that deficits must be reduced to prevent inflation and avoid all sorts of down-stream problems from too much government spending. But it turns out that this philosophical belief is based on shaky economic logic, and has dire results for public health.

Whether to cut budgets, or take on more stimulus spending at any given time can actually be answered through data and scientific approaches, rather than simply through ideologically-driven theories. As we discuss in the book, a key calculation called the “fiscal multiplier” can help us determine when it’s a smart time to cut or stimulate government budgets for public health or any other sector—and, conversely, which budgets are particularly helpful to cut or boost at any given time. The multiplier is a calculation that describes how many dollars of economic growth we get for each $1 of government spending on a particular program at a particular time.

During the ongoing recession, many people assumed that the multiplier was less than 1–meaning that each $1 of government spending would result in less than $1 of economic growth (a net loss) due to crowding-out of the private sector. But now multiple different research groups have actually calculated the multiplier from real data sources (rather than assuming its value)–and found that its value is actually much larger than 1. What this means is that sequester and austerity at this point in time will tend to produce more long-term costs than outweigh short-term budgetary gains, because we need stimulus to promote more employment and consumer spending. The multiplier for public health programs is particularly large because of the large workforce in the health sector, and the downstream effects of a healthy workforce on the economy. 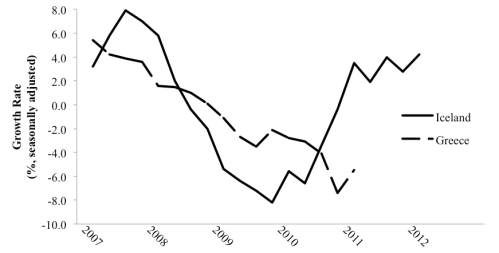 The good news is that some people did take this advice to heart. Iceland, for example, actually experienced a larger crisis than Greece (with debt at 800% of its GDP during the recession), due to bad investments among some of its key banks, which had invested in the US mortgage-backed securities that generated our housing crisis. But Iceland managed to take on a strategy that led to its rapid economic recovery; the country subjected its economic policy to a democratic vote, and decided to pay off its bankers’ debts slowly rather than all at once. It chose not to pay for the banker’s mistakes by chopping public sector budgets. Iceland remained one of the happiest, and healthiest, countries in the world despite experiencing what The Economist called the largest banking crisis in world history relative to the size of its economy. And looking through the history books, it turns out that Iceland is not an isolated case—rather, the Great Depression and The New Deal provide some other key examples of how making data-driven public health decisions during and after an economic crisis can avert serious disaster for both our economy and our health.

A major section of our book describes the data on what we can do next—how to maintain our public health systems in both bad times and after our recovery. The first, and perhaps most important, principle is a simple one: “first do no harm”. It’s often stated that the majority of factors that affect our public health have nothing to do with which medical school our doctors went to; health doesn’t start on an exam table or in an intensive care unit. It starts at home, with the quality of the air we breathe, the food we eat, and whether we smoke or drink too much. Our economic policies have a profound influence on these factors, as evidenced by decades of research. 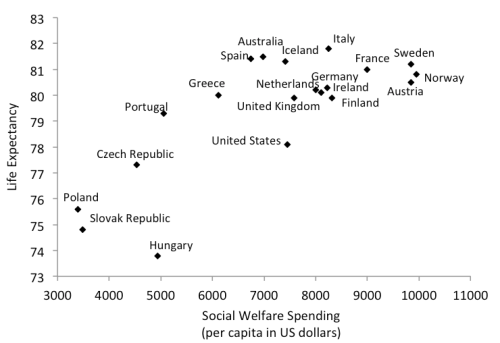 If our social and economic policies were tested as rigorously as we test pills in a clinical trial, we would have stopped our ongoing austerity experiment long ago, given the profound evidence of its lack of benefits and deadly side-effects. We should test our social and economic policies with the same evidence-based rigor that we test other interventions that affect our health. But that requires a willingness to follow the data—and to use evidence to guide how our governments will protect their electorate in times of great vulnerability to poverty and illness.

This entry was posted in Health economics, Social determinants of health, Stats. Bookmark the permalink.