That spending is not, however, increasing at a particularly unusual rate. U.S. healthcare spending was rising at 3.6% between 1996 and 2006, lower than the OECD median of 3.9% and the very high levels of 4.3% and 4.8% in the UK and New Zealand, respectively. More interestingly, while the U.S. has the highest overall spending and the lowest percentage of the population covered by government programs (nearly every other country in the analysis had 100% public healthcare coverage), the cost for the public sector was also highest in the U.S.: $3,074 per person of taxpayer public spending on healthcare in America, versus $2,027 per person as the OECD median after adjusting for cost of living differences. Less surprisingly, private health spending was also highest in the U.S., at $2,783 per capita versus the OECD median of $141 (yes, that’s one-hundred fourty-one). Out of pocket, Americans spend $857 per person, which is only less than the Swiss, who pay $1,305 out of pocket; the OECD median was $483 as of 2006 (the latest data available in a comparable format).

What we’re paying for

Where is all this money going?

As David Squires of the Commonwealth Fund has explained, there have been at least five dominant theories: (1) that the U.S. is wealthier so we just pay more in our economy; (2) that we have an older and sicker population; (3) that we utilize more healthcare (e.g., go to doctors, hospitals and emergency rooms more); (4) that the costs comes from our use of more technology; or (5) that we charge higher prices for the same goods and services.

Let’s test each of these theories against the data.

Does higher income necessarily result in greater healthcare spending? Actually, the U.S. seems to be an outlier from the overall curve between GDP and healthcare spending per capita. While most countries do spend more when they have more money, the U.S. disproportionately spends more, by about $3,000 per head.

Do we simply have an older and sicker population? Actually, the proportion of the population older than age 65 is 13% in America (see graph below), which is lower than the OECD median of 16% and much lower than Japan’s 23%. Also, our population does not necessarily seem to be more ill. Among key healthcare risk factors such as smoking, Americans actually do better in most cases. Only 16% of Americans smoke, as compared to the OECD median of 22% and the 28% rate in The Netherlands. Similar trends exist for alcohol use and related healthcare risk factors. The one exception to this rule is our obesity rate, which is at a whopping 34% among adults, though this does not seem to sufficiently explain the overall heavier health expenditures (sorry for the pun).

So do we simply use more expensive technologies? Are doctors murdering our pocketbooks with their tests? In fact, Americans get less MRI scans per person than Japan, and have fewer hip and knee replacements and cardiac catheterizations than many European countries. The distribution of our spending among various sectors—basic medical care, diagnostics, hospitals, pharmaceuticals, and nursing homes—is not actually very different from European countries (we actually spend far less of our healthcare expenditures on nursing homes, at only 6.2% as compared to 20% in Switzerland, and slightly more than European countries on basic care). The highest cost technologies don’t seem to be disproportionately used by us. 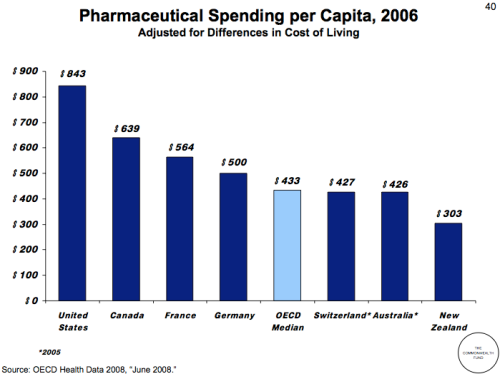 So overall, our spending is out of proportion to our income, our population is younger than most of Europe, and we have fewer hospital stays with only typical technology use. This leaves us with the theory that higher drug and imaging prices, along with higher physicians’ fees and income are driving our healthcare costs.

Do we get more in return?

The results of this hefty spending on the same drugs and (perhaps better) doctors doesn’t seem to clearly correlate into better outcomes. Mortality rates in U.S. hospitals after admission for a heart attack, for example, are just average—at 4.3% as compared to just 2.3% in Denmark. Similarly depressing results are available for respiratory diseases, cancers, and surgical or medical mistakes. And overall we have the highest rate of death that would be amenable to healthcare intervention (deaths among people less than 75 years old that are from heart attacks, strokes, diabetes and bacterial infections); the U.S. has 96 such deaths per 100,000 people as compared to France’s 55 deaths.

The most obvious conclusion from this analysis is that a single-payer health system can contain costs and streamline clinical management protocols to avoid the unnecessary testing and procedures of private fee-for-service systems like the U.S. system, as well as incentivizing prevention. Nearly every other country in the analysis had a 100% government-based health insurance system, except for Germany at 89.5% (the U.S. has just 27.4% of the population covered through public-sector programs). As the single payer, the government needs to prevent disease to maintain a budget, rather than having the incentive of making money from managing a disease (doing procedures, ordering tests) but not preventing it, as in the fee-for-service private U.S. model. It can also bulk-purchase goods and supplies and help equalize salaries between current public sector rates and private sector networks that feed off of mutual referral systems and inflated pricing.

There are a several important limitations to this type of “cross-national” (e.g., horserace) analysis. First off, there’s always the risk of “ecological fallacy” in assessments that do not incorporate individual-level data—that is, the people who are spending more are not necessarily the people having the higher mortality, hence the correlation between spending and results may be an artifact of some other factors we haven’t accounted for (though that seems doubtful). Secondly, we don’t have the advantage of randomization as we do in a clinical study; all sorts of other sociodemographic factors affect the incidence of disease between countries. As we discussed earlier, social welfare spending, income inequality and accessibility of high-risk consumer products (e.g., tobacco, alcohol, poor food quality) all have a tremendous impact on disease rates beyond the control of the healthcare system—affecting the burden on that system. This is evidenced by the high U.S. obesity rate that translates into a high number of patients with chronic cardiovascular disease and diabetes that may increase spending as avoided deaths increase disease prevalence (that is, because people are chronically ill, and not dying, there is higher cost, but that cost may be a “good thing” in that it keeps people alive; we don’t want a low prevalence of disease simply by allowing everyone who gets ill to die).

Finally, and perhaps most importantly, the nature of “universal healthcare” is somewhat different between different countries. We should be cautious that even within Europe, systems like Germany that have some degree of private insurance are quite different from systems like the U.K. where the National Health Service was once quite universally dominant and is now under flux with calls for reform (despite evidence that it works much better than the post-reform version would) from the new conservative government. So there is not always universality within “universal” healthcare systems in Europe; each system is itself dynamic and complex during the years of this analysis.

This entry was posted in Health economics. Bookmark the permalink.

4 responses to “U.S. versus European healthcare costs: the data”